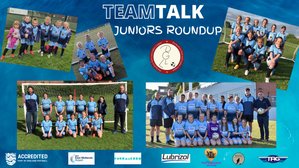 There were a number of cases of FGB - „first game back” - syndrome reported amongst our junior teams in their delayed first games of the season on Saturday, as several made heavy weather of getting the season underway

All teams observed a minute’s silence before their games as a mark of respect following the passing of HM Queen Elizabeth.

U16 Panthers v Wirksworth
The Panthers started really slowly and went one down in the first couple of minutes. This put us on the back foot and sitting too deep we conceded another two by the quarter hour, before we started to play. For the rest of the half we matched Wirksworth but conceded another shortly before half-time.

We were looking to continue the improved performance in the second half but conceded within the first minute of kick off and never recovered after that. There were some positives though Izzy and Ruby had really good debuts and battled until the last minute, and our goalkeeper Jess came out well. I know these girls have it in them to compete when they are at the races - as they showed in the last thirty minutes of the first half, so we’ll put it down to „first game back Syndrome”.
Aaron

U12 Bobcats v Woodlands
A classic case of FGB Syndrome as the girls struggled to demonstrate the stuff we’ve trained on and can do. The sun’s shining and we know we can play much much better.
Andy

U11 Phoenix v Duffield
The majority of the girls had spent a week on school PGL so were understandably tired and found it hard going against a strong Duffield team early on, but gradually grew into the game, started to work well together and showed great determination to finish strongly. A shoutout to Maisie for some great strikes on goal, and to Holly who went in goal and made some great saves.
Sophie

U10 Lionesses v Shardlow
The Lionesses started really well, with some excellent passing and attacking, matching Shardlow in the early stages.

Frankie & Edie did amazing in goal fending off some dangerous attacks. Ruby and Em in defence, and Isabella part way through held a good line. Good tackles from Georgia, Molly and Zoe. Daisy did a cracking job with her strong kicks again, Iyslas strong left foot helped out too.
It was a first match for Emelia and Jasmine who both showed they will be great additions to the team. Edie came out of goal and put in some fast runs. Well done girls and congrats to Emelia on a well deserved player of the match.
Rebecca

U9 Jaguars v Belper
With Alicia and Zara making their debuts on Saturday, the girls settled well into the game and kept Belper in their own half with a series of well earned corners and the Belper goalkeeper making some impressive saves. Lots of good running by the Jaguars forcing several shots on goal. When Belper made it into the Jaguars’ penalty area, they were faced with Alicia who was impressive in goal. The second half started in the same fashion, with Jaguars running, crossing and shooting along with some impressive passing moves to get into the Belper penalty area. Both Lucy and Rose hit the post and Amber shot from outside the area as Jaguars piled on the pressure. Overall a very hard working and confident performance. Player of the match was Zara.
James