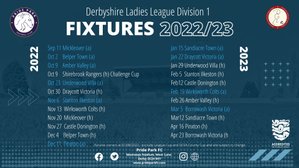 The make-up of Divisions 1 and 2 have been confirmed and the fixtures have been published.

The Derbyshire Ladies League have confirmed the constitution of Divisions 1 and 2, both of which will comprise 12 teams and have published the fixtures (to which there may be some alterations after the Womens’ FA Cup draw is published on Thursday).

Pride Park get the season underway with a trip to Mickleover on Sunday 11th September. Reigning champions Draycott Victoria come to Moorways on 30th October - the return fixture is on 22nd January. The opening fixture of the New Year (subject to a Cup game being scheduled on 8th January) is a trip to Sandiacre Town on 15th January. Concluding the season - subject, of course, to postponements, re-scheduled games, and cup fixtures - Borrowash Victoria come to Moorways on 23rd April.

The full League fixture schedule as published by the DGLL can be found at: https://www.gotfootball.co.uk/events/?EventID=4437

The preliminary round of the Challenge Cup has also been drawn, with The Pride facing Shirebrook Rangers at Moorways on 16th October. Fixtures for the League Cup and DCFA County Cup are yet to be confirmed.